#57 European meeting at Palermo: when researchers in sociology meet social workers for a big challenge “How to prevent the violence among the young people” Peerthink Part 1

Meeting at Palermo in Sicily between reasearchers in socioloy and social workers who try to elaborate a new approach of the violence’s prevention among the young people in Europe. 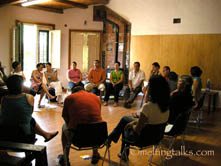 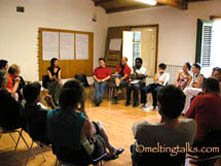 The whole group with the sociologists and social workers during the workshop at Palermo : very short breaks, long hours working…

I already recorded some interviews with these people coming from Slovenia, Austria, Germany, Italy and France during their first meeting at Marseille last year (check the podcast#55) where they launched their project PEERTHINK financed by an European programm called Daphnee.
This time the researchers invited the social workers from each country involved in the project to cross their point of views, find a common language between strategy and practice to write at the end a handbook useful fort he people who are working in this area.

In this podcast (part 1) two interviews with Monica Savier from BBJ Share It who organized the meeting at Palermo and with three researchers in sociology from DISSENS-Berlin who are the Peerthink’s project’s managers. 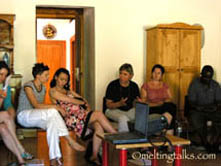 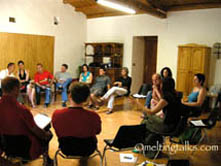 Monica speaking and Mart (Dissens-Berlin) simultaneously translating to a German social worker who fluently speaks Turkish but not English !! A Slovenian social worker explaining her method.