In this podcast (part 3) with 5 interviews, it’s the end of the report about the European meeting at Palermo where theory makers and practioners shared their experiences and exchanged their points of views about the ways to prevent the violence among the young people.
We will start with the Slovenian workers who promote a non-violent communication in the society with a feminist approach which doesn’t exclude the men, then two Austrian and Italian workers who were both born in Africa and who became kind of cultural mediators for the migrants in their current countries, in between a French street social worker who takes care of the disadvantaged kids of the city Marseille and to finish a French sociologist who explained her own contribution as well as the PEERTHINK project’s next steps until the final conference at Berlin in February 2009.
After many days hard work, a little bit of African music was offered to us maybe to remember that Africa is not far away from Europe ! 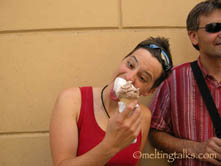 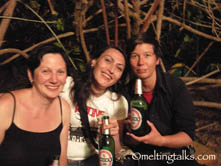 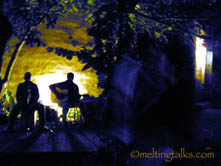 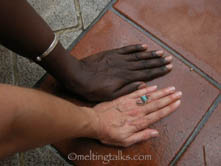 Nice Italian ice-cream for Mart; fine German beers made in their hometown have another taste in Sicily for the girls from Bremen; African musicians in “our” garden; Abdullah “the Sicilian” and me measuring our hands’ sizes…:)