#64 Daphnee Peerthink : How to prevent the violence among the youngsters in Europe : Interviews at the final conference in Berlin Part 2

In this podcast part 2 we continue the interviews with the European researchers in sociology and social workers about their project PEERTHINK and how to prevent the violence among the youngsters through an intersectional approach : we start with a political educator from Bremen (Germany) about the conference given in the morning in Berlin by Angela McRobbie, a famous researcher in sociology coming from the UK : the violence she pointed out in the schools was quite impressive for everybody in the audience with frequent reports of knives attacks and often murders until the parents prefer to keep their children home ! 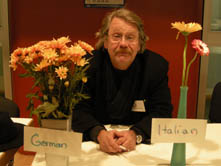 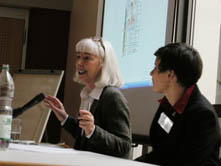 Ingo a German researcher who worked for a long time in Italy ! Angela McRobbie from UK and Mart from DISSENS Germany (the project’s structur leader) during the conference in Berlin.

Then two streets educators from Marseille (Addap 13) explained the hope, frustration and interests they had during the project Peerthink and which kind of expectations they have for a future participation in a European work which will mix theory and practice, insisting about the urgency to find concrete solutions. We close with a researcher in sociology in Marseille (Eurocircle) who gives more details about the website created on the internet to share their handbook with the world and the new proposal they hope to develop in the next future with the same partners.

I play music’s excerpts from Ed Hosdikian (Marseille) and Prairie Dugz (UK) and at the end an interesting advice from the Pranksters’ (Denmark) drummer I met in Berlin (check them on myspace for more).